It was quite patriotic. Every single class at my children’s school went to London at least once – ON THE TRAIN. Even the EYFS Reception children.

We had a barbecue to celebrate the Queen’s Diamond Jubilee and the barbecue blew up. 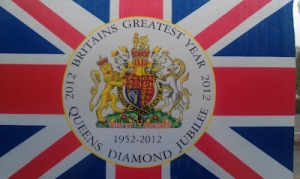 Shame about the missing apostrophes (Thanks to apostropheabuse.com)

We had a ninth birthday pyjama party and a sixth birthday Olympics party. We didn’t have any of these though:

Our hearts swelled with British pride during the opening and closing ceremonies of London 2012. I watched more sport than I have ever watched (usually only the rugby will do) and cheered on our Olympic heroes. I learnt that medal and podium are now used as verbs.

The Oxford English Dictionary announced its word of the year: omnishambles, meaning a situation that has been comprehensively mismanaged, characterised by a string of blunders and miscalculations. I’m not sure that the word summed up the events of the year though.

I also did a lot of second screening: the practice or activity of watching television while simultaneously using a smartphone, tablet computer, laptop, or other screen device, typically in order to read about the programme being watched or post about it on a social media site.

We went to Legoland as a family and had a really lovely day out. I was shocked, however, to find several proofreading errors. Considering the extortionate amount of money this attraction charges to enter, you’d think they could spend some of it on proofreading. 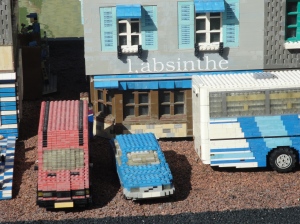 Shame about this – all that hard work building it and the apostrophe becomes a comma!

We’ve done the Mobot and Gangnam Style. We’ve even danced in the pouring rain. My son’s dance routines to Strictly have ended in nudity as usual (his, you’ll be pleased to know!) His version of I’m Sexy and I Know It is very energetic and amusing. And since he was given a shirt (complete with tie) for Christmas, which I swear is impregnated with E-numbers, we’ve seen that quite a lot…

We went to Bournemouth for the first time ever and took the children to Nottingham for a trip down memory lane as I went to university there. We also had a trip to Newcastle for my brother’s birthday and a wonderful summer holiday in France where the children did a lot of Extreme Reading. My daughter also discovered the joy of reading for pleasure. Yippee!

We had a fantastic Christmas with family and a superb New Year’s Eve with good friends. That seems so long ago now.

We discussed plans for the new year as a family and my six-year-old son has made a couple of “revolutions”: one is to work harder in school and the other is to “not do anything ‘hurtable’ to the rest of the family”.

We have decided to create a list of things we want to do or achieve in 2013. This includes flying kites; family bike rides; going to an ice hockey match; family swimming sessions (rather than just swimming lessons for the children); going to Cambridge; wet felting; going to see Les Misérables (for me and a friend this week – that will be one ticked off already!); more board games; camping in the garden in the summer; and more sewing for the children and me (Monster was desperate to have a go so we’ve started a lion and Madam is doing a peregrine to fit in with her school topic of King Arthur and the Middle Ages).

We’d better get a move on as the first month of the year is nearly finished!

I haven’t written a diary since I was 9 or 10 and a babysitter told me off for writing it after she had turned the lights off. I have blue eyes. I have a 100-year-old grandmother. I enjoy embroidery and reading in my spare time, if spare time exists. I am the descendant of a Persian princess from the 16th Century who married one of my ancestors who was an English adventurer. Spring is my favourite time of year but autumn inspires me because of the rich palette of colours which appear on the trees. I have two children, one of each flavour, and a Peter Pan of a husband who is like a third child sometimes. I’m a ‘glass is half full’ kind of person. My favourite colour is blue: the colour of the background in Microsoft Word. I enjoy a good joke, was brought up on puns and like to see the lighter side of life. I am a freelance proofreader.
View all posts by r2ruth →
This entry was posted in apostrophe, children, family, history, Holidays, Olympics 2012, proofread, punctuation, Queen's Diamond Jubilee, Uncategorized and tagged apostrophe, children, family, history, patriotic, proofread, punctuation, school. Bookmark the permalink.